What is the common ground for modern psychotherapy? (EACLIPT Webinar Series) 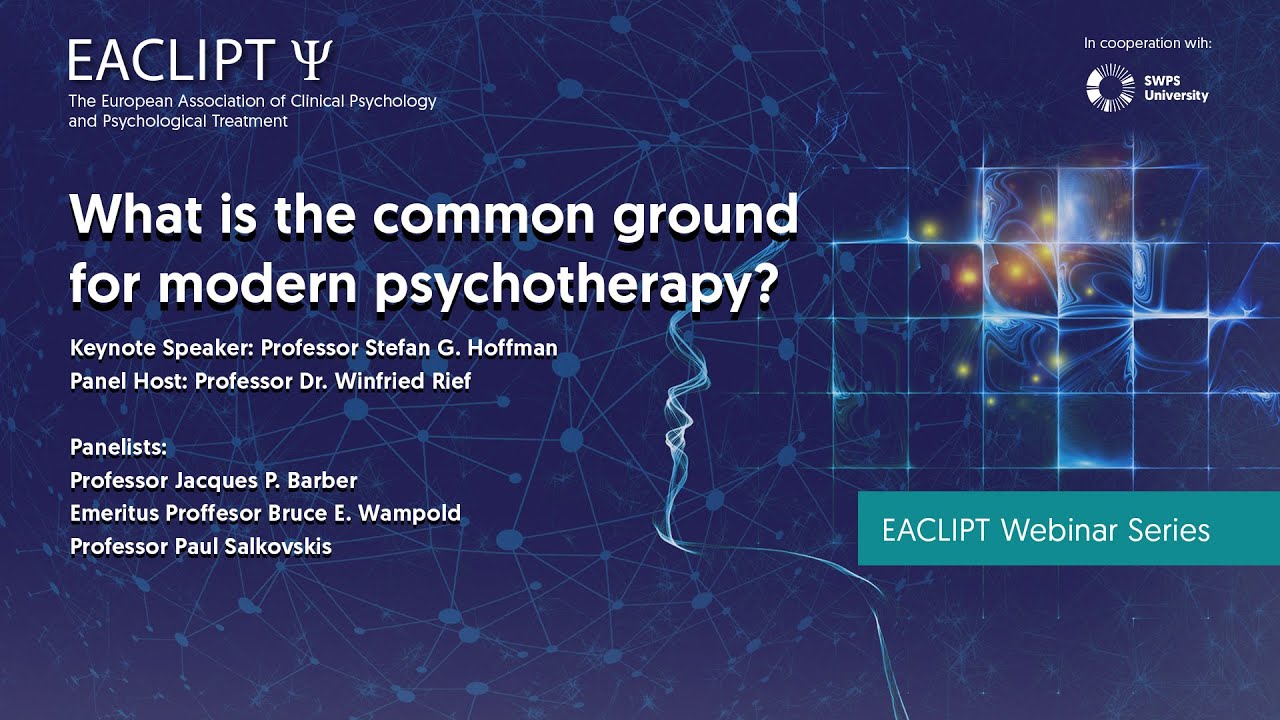 The field of psychotherapy has developed from different roots, and many clinicians and scientists still consider psychotherapy as a collection of unconnected groups of theories and associated interventions. This approach prevents a cohesive development of the discipline and a holistic treatment of patients. During the webinar, Professor Stefan G. Hofmann from the Philipps-University Marburg, Germany and Boston University, USA will talk about process-based psychotherapy, which takes the view that mental health problems are assumed to exist as systems of inter-connected elements.

The keynote lecture will be followed by a panel discussion on finding the common ground for evidence-based psychotherapies.

KEYNOTE LECTURE: PROCESS-BASED PSYCHOTHERAPY
For decades, evidence-based therapy, such as Cognitive Behavioral Therapy (CBT), has been defined in terms of treatment protocols focused on syndromes as defined by the DSM and ICD. These psychiatric classification systems assume that psychological problems are expressions of latent disease entities. However, there is little evidence to support this restrictive assumption. A process-focused approach (Process-Based Therapy, PBT) is now emerging. This approach does not rely on the assumption that psychological problems are expressions of latent disease entities, but it does not rule it out either. Instead, mental health problems are assumed to exist as systems of inter-connected elements. As is true for many complex networks, such a change can occur abruptly once the network reaches a tipping point. PBT directly links treatment techniques to processes in the individual client, thereby linking classification to treatment based on functional analysis and complex networks. This offers a less restrictive and more externally valid alternative to the latent disease model, while offering exciting new directions for future research in psychiatry and is in line with personalized medicine.

KEYNOTE SPEAKER
Stefan G. Hofmann, Ph.D. – is the Alexander von Humboldt Professor of Clinical Translational Psychology of the Philipps-University Marburg, Germany, and also Professor of Psychology at the Department of Psychological and Brain Sciences at Boston University. He has been president of ABCT and IACP, and is editor-in-chief of Cognitive Therapy and Research. He has published more than 400 peer-reviewed journal articles and 20 books. He has been included in list of a Highly Cited Researcher by Clarivate and Thomson Reuters since 2015, among many other awards, including the Aaron T. Beck Award for Significant and Enduring Contributions to the Field of Cognitive Therapy by the Academy of Cognitive Therapy. His research focuses on the mechanism of treatment change, translating discoveries from neuroscience into clinical applications, emotion regulation, and cultural expressions of psychopathology. For more information, see: www.bostonanxiety.org.

PANEL DISCUSSION
Is psychotherapy just a collection of different approaches? Searching for the common ground for evidence-based psychotherapies